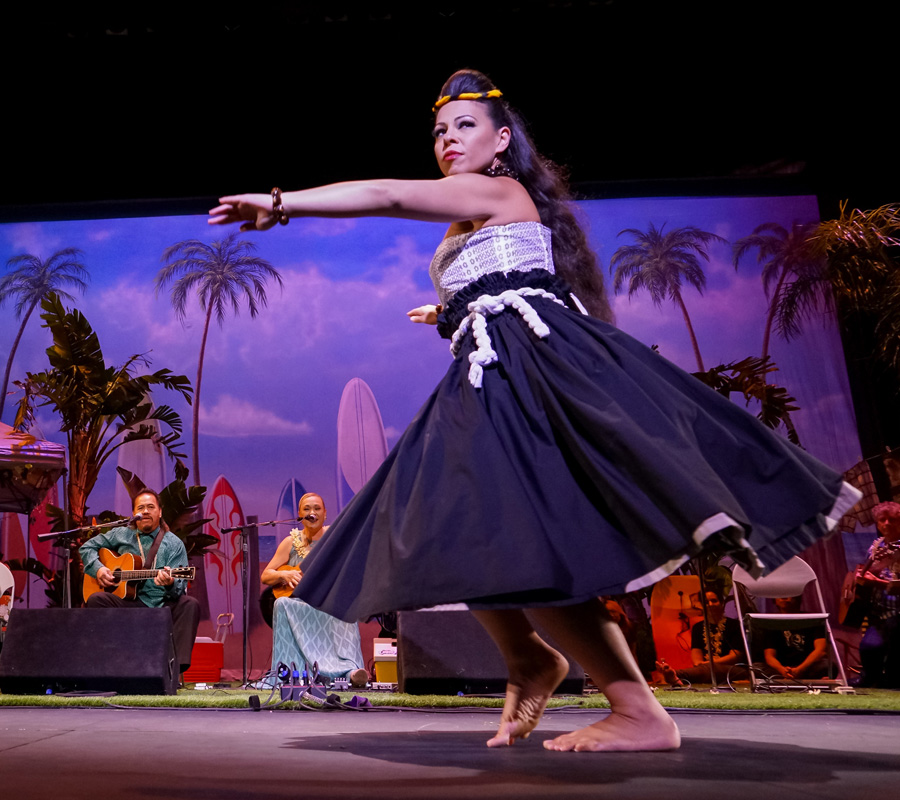 Kala Koa Entertainment celebrates 12 years of bringing the biggest and brightest names in Hawaiian music to the mainland with the 2018 Southern California Slack Key Festival returning to the Redondo Beach Performing Arts Center on Sunday, January 20, 2019 at 2:00 p.m.

One of the most acclaimed Hawaiian concerts to ever leave the islands, the Southern California Slack Key Festival takes fans on a Hawaiian musical journey that showcases GRAMMY-winning slack key guitarists, the best hula dancers in the world, special guest performers and a free to the public Island Marketplace.

The Southern California Slack Key Festival – the first of its kind anywhere outside of Hawaii – set a major milestone for Hawaiian music events on the mainland when it debuted in 2008 and has garnered a huge loyal following – creating, cultivating, and renewing interest in Hawaii and its music.

What is Hawaiian Slack Key Guitar Music?
Hawaiian Slack Key Guitar (ki ho’alu) is truly one of the world’s great acoustic guitar traditions, considered to be one of the oldest music traditions to still be a viable (other than just historical) part of a modern culture. Ki ho’alu, which literally means to “loosen the key,” is the Hawaiian language name for the solo finger-picked style unique to Hawaii. In this tradition, the strings (or “keys”) are “slacked” to produce many different tunings, which usually contain a major chord, or a chord with a major 7th note, or sometimes one with a 6th note in it. Each tuning produces a lingering sound behind the melody and has a characteristic resonance and fingering, with the thumb playing the bass while the other fingers play the melody and improvise in a finger-picked style.

How does the distinctive sound of slack key music fit into the fabric of Hawaiian music and culture? Watch this video and learn more about this beautiful generations-old art form – https://vimeo.com/155399448.

In addition to the concert, an Island Marketplace – free to the public – takes place from 11:00 a.m. to 5:00 p.m., complete with Shave Ice, Hawaiian food, and great Hawaiian products and crafts.

About the Artists
George Kuo – Plays in the traditional nahenahe (sweet, soothing) style, bridging today’s generation with the older generations. He has been twice recognized with excellence in recording achievement by the Hawaii Academy of Recording Arts, Na Hoku Hanohano Awards, for Instrumental Album of the year in 1995 for “Hawaiian Touch” and 1996 for “Aloha No Na Kupuna” (Love for the Elders). In 1986 Eddie Kamae asked Kuo to join his group, the now legendary SONS OF HAWAII whose members included Gabby Pahinui, Atta Isaacs, Dennis Kamakahi and Sonny Chillingworth.

Jeff Peterson – Recognized as one of Hawaii’s most versatile musicians, Jeff Peterson is at the heart of the Hawaiian music scene today. His focus on Slack Key guitar, classical, and jazz music has allowed him to develop a unique and transcendent voice on the guitar while being deeply rooted in the traditions of his Hawaiian heritage.

Jim “Kimo” West – One of ki ho ‘alu’s most unique talents. Award-winning “Kimo” is a virtuosic player and prolific composer for film and TV, his delicate, heartfelt playing technique and his generous output of new, exciting slack key guitar originals puts him solidly in a category of his own. He is also the long-time guitarist for Weird Al Yankovic.

Kawika Kahiapo – Slack Key guitarist Kawika Kahiapo has contributed to more than 84 recording projects and performed with numerous artists both on stage and as a studio musician, and is a regular at slack key festivals. Kahiapo’s most recent solo releases won two Na Hoku Hanohano Awards in 2015 – one for Island Music Album of the Year for Ku‘u ‘Aina Aloha, the other for Slack Key Album of the Year for Ho‘omaluhia.

Sonny Lim – His professional career started as a teenager when he mastered the steel guitar given to him by paniolo, uncle Sonny Alapai of Pu‘uanahulu. Sonny Lim commuted to Oahu to perform with the Makaha Sons of Ni‘ihau. Over the past two decades Lim has performed with virtually every ‘name’ musician in Hawai‘i. He is a multiple Hoku award winner, performs regularly with his family in Hawai‘i and Japan.

Ikaika Marzo – A descendant of the Native Hawaiian music families that come from Kalapana, far from the modern world, Ikaika Marzo enjoys the lifestyle and music of Kalapana which has remained unique and distinct as it has evolved directly from living in Hawaii in a Hawaiian way and a love for that lifestyle and its music. In addition to mastering Kiho’alu, Marzo is also guide for Kalapana Cultural Tours.

Teresa Bright – The award-winning vocalist is universally recognized as one of Hawai’i top singers. The Hawai’i Academy of Recording Arts has awarded her its top Female Vocalist of the Year honor. Teresa Bright has recorded many albums including Self Portrait, Painted Tradition, A Bright Hawaiian Christmas, Ka Pilina, Quiet Nights, A Christmas Season’s Delight, Lei Ana and A Gallery. Hers is a voice crystalline, sultry, ethereal, powerful, touched with jazz and a multitude of color.