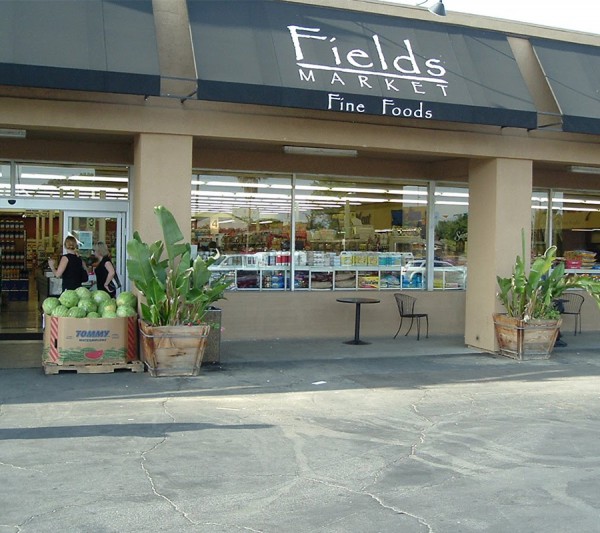 Today it serves as the backdrop for countless television shows and movies. But at one time, the small, local grocery store—a throwback to midcentury America—had almost seen its better days.

“When we first took the place over in the early 1990s, the store was in pretty bad shape. It was like the worst house in the neighborhood type of thing; dirty, stinky, and the people who owned it were running it like a liquor store. It was in desperate need of a facelift,” says co-owner of Fields Market, Bill Rinck.

A native of Spokane, Washington, Bill first moved to southern California 25 years ago. He would work for larger grocery store chains (such as Hue’s and Ralph’s), and eventually work his way into upper management. Once he decided to go into business for himself, Rinck says he and his partner, Richard Smith, set out to do something different. “Our vision was to make it the local meeting place—the neighborhood hub—where people would come and hang out and where everyone knows everybody, like the ‘Mayberry’ days.” As far as naming the store, we’d wanted to call it “Fresh Fields” but that was already taken, so we just went with ‘Fields’.”

The store would also have numerous owners before Smith and Rinck found it. “Originally it had been an Alpha Beta—that was over 50 years ago—and it would be a number of different stores over the years. When Richard and I bought it, it was nothing special and didn’t really bring anything to the community.” Although the two men envisioned something unique and unlike what any of their competitors were doing, they never imagined the entertainment industry is what would set them apart.

As far as filming, he says, “The prior owners had allowed a couple shoots here. Then right after we bought it, a location scout from “Seventh Heaven” came in. That was in 1994. We really knew nothing about the process.” However, Rinck says their lack of experience wasn’t a problem. “The scout basically told me what they were going to be doing and how much they would pay us. The production guys told us our space was perfect for shooting and that we should set it up like a ready-made business. After that, we got marked lighting panels, pre-printed contracts and figured out our hourly rate. Suddenly scouts were showing up left and right. They shot commercials, television shows, you name it. Then along came ‘Desperate Housewives’. When that got on T.V. we couldn’t keep people away. Everyone wanted to come in and check us out.”

When asked what makes his market so appealing to producers, Rinck says, “We don’t look like the big chains. Our store is very simple and very generic inside, so when film scouts see it, they like the fact that it can be middle America; it can be anywhere and just about any time period.” And that versatility is what keeps production companies coming back. “We’ve been in so many movies and television shows; “Hit and Run”,” Matchstick Men”, “Alvin and the Chipmunks”, “Hell’s Kitchen”, “The Office”, “Criminal Minds”, “NCIS”, “Bones”, and an AT&T commercial featuring Ludacris. They’ve also done commercials for Afflac—the duck was actually here for that one—Hummer, Old Navy, Cheerios, Oscar Mayer, Pepsi with Regis Philbin, so many,” says Rinck.

The Hollywood ties don’t stop there either. Store manager and resident character actor, Ed Corbin, has appeared in dozens of television shows himself; everything from “The X Files”, “The Bold and the Beautiful” and “Weeds”, to “Becker”, “Titus” and “Saving Grace”. In 2010, Corbin appeared in the Cohen Brother’s remake of the 1969 film, “True Grit”. Of the tall, deep-voiced Corbin, Rinck says, “People that come in here love Ed; he literally knows the names of every single one of our customers. That’s one of the things they like so much about shopping here.”

And Rinck says that while the store has closed once or twice for filming—mainly because of security—he says, “We like to keep it open for our customers. The producers are really flexible and they don’t mind at all. We are still in the neighborhood and people count on us. Plus our customers can be a part of what’s going on. I don’t think it’s that of a big deal, but there are people who absolutely love television. When our customers come in with their out-of-town friends or family, they can say ‘That’s my store on T.V.!’” He also says the celebrities don’t mind an open set either. They were recently shooting a new show (“The Comedians”) with Billy Crystal and Josh Gad. One of our customers came in the store, walked right up to Billy Crystal and said, ‘You are funny as hell!’ Billy, Josh and the whole production team just started cracking up. It was pretty neat.”

But even after all of the celebrities, film scouts, and T.V. shoots, Bill Rinck maintains that Fields is still just a regular store. “We know all of our customers by name, they know us and that’s just kind of how we are. We have live music during the spring and summer, and Bar-B-Q outside in the parking lot every Saturday and Sunday. We’re just a place people like to come.”

Still, he says to try and describe all that his market encompasses is tricky. “I guess if we had a tagline or a slogan, ‘You never know who or what you’re going to see when you come to Fields’ would definitely be it.”