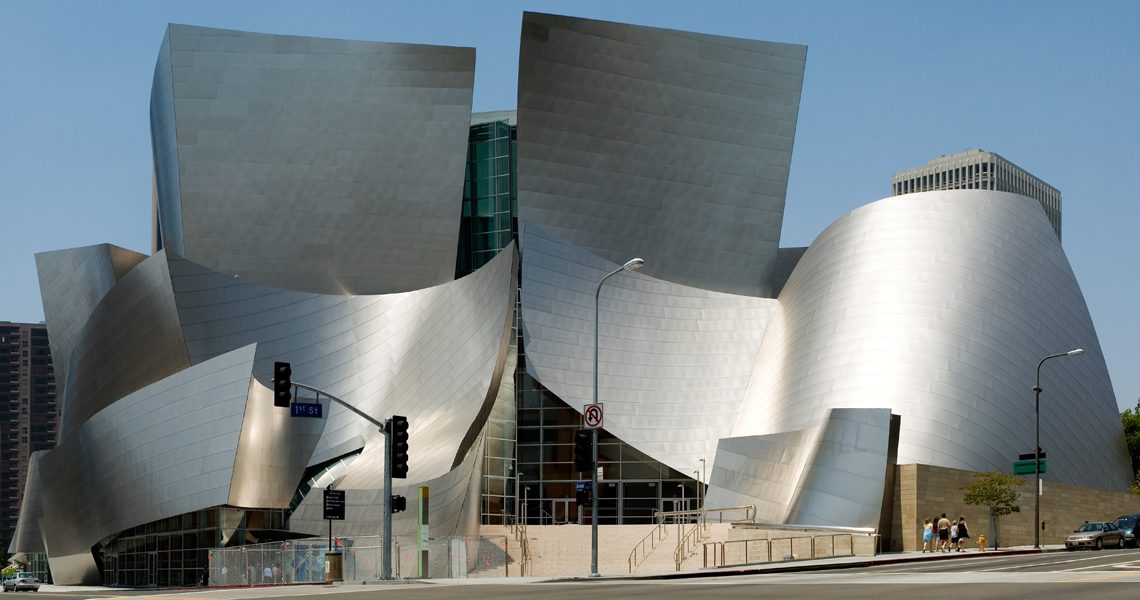 The corner of Sunset & Havenhurst in Los Angeles is about to go down in history. 8150 Sunset is already across the street from the legendary Chateau Marmont on the most famous stretch of boulevard in the world, but now the southeast side of this intersection is being “utterly transformed” by a $300 million mixed-use project designed by architect Frank Gehry.

Whether you’re familiar with his name or not, you’ve seen Gehry’s work, and you know his curvy, reality-bending aesthetic. He’s the visionaire behind such world-famous attractions such as The Guggenheim Museum in Bilbao, Spain, the Walt Disney Concert Hall in downtown Los Angeles, the Experience Music Project in Seattle and Prague’s surreal Dancing House. In 2010, the World Architecture Survey cited his contemporary works as among the most important in architecture, and Vanity Fair named him “the most important architect of our age.”

It’s no surprise that when Gehry’s name is on something, people pay attention. And the kind of clout he brings also eases minds. He was actually hired onto 8150 Sunset after an outcry from the neighborhood’s residents over the original designs for the lot. When Gehry was brought on board, the project was elevated to a work of art before the famed architect even revealed his breath-taking vision.

Gehry has achieved something few architects have: universal notoriety and name recognition. His brand has extended beyond architecture and landed him jobs designing jewelry for Tiffany & Co., furniture, and a bottle for Wyborowa Vodka. In 2005, he even appeared on an episode of The Simpsons. A full 10 years after standing under such a massive pop-culture spotlight, 2015 proved Gehry is more relevant than ever, both culturally and in the design and architecture industry. Starting in September, LACMA hosted a beautiful retrospective on the architect’s career. In the same influx of recognition, Paul Goldberger also released his groundbreaking biography on the legend: “Building Art: The Life and Work of Frank Gehry.”

Though he was born in Canada, Los Angeles is proud to claim Gehry as one of their own. He became a Southern California native after relocating to attend university in 1947. Gehry established his first practice in 1962, and from his Los Angeles office, has had a transformational effect in every area he’s worked, changing the way the entire architecture industry operates, evolving the look of modern design, and molding the aesthetic of Southern California, itself.

Christopher Mercier, founder of (fer) studio and a former Gehry associate, said, “His work really took what was happening to the 40s and 50s in terms of early modernism and retranslated it into something more eclectic. [More uniquely] Los Angeles.”

(fer) studio partner Doug Pierson, another Gehry alumni, said, “[Gehry has] had so much influence on the look of Southern California over the decades. But he [was a leader] in the re-interpretation of modernism. He [is largely responsible for] the shift from typical modernism to what we have now.”

The theme of transformation comes up over and over in Gehry’s history, something deeply entwined in his legacy. He has been credited with changing the way the entire industry functions, evolving the design process from simple drawing and scale-modeling to a largely digital artform. His innovations in this realm haven’t just increased workflow efficiency, it’s actually expanded the scope of what can physically be built.

The Guggenheim Museum in Spain, the aesthetic progenitor of Los Angeles’ famed Walt Disney Concert Hall, was only possible because of Gehry’s use of design software originally meant for developing aeronautics and fighter jets. Mercier was actually an associate at Gehry’s firm during the pioneering process of creating that building. He says, “When we [first started] designing Bilbao, we actually drew the initial sections of the building by hand because we didn’t have enough auto-CAD stations, and there wasn’t enough digital work being done yet. [But] during that project [the design process actually] evolved to become fully digital.”

It’s this innovation, rapid adaptation and the unique beauty that resulted from it, that catapulted Gehry into international acclaim in 1997. New Yorker Magazine hailed the Spanish Guggenheim as “a masterpiece of the twentieth century,” and the amazing work he had been doing on Southern California projects like Santa Monica Place, the Cabrillo Marine Aquarium and the California Museum of Science and Industry became world-class attractions.

It’s also when he began to make his biggest contributions to the architecture industry as a whole. “I think more important than the aesthetic contributions is the way [Gehry] developed how computers and digital technology could be used in building what we thought were unbuildable forms,” said Mercier.

Still, in spite of Gehry’s revolutionary work, he hasn’t totally abandoned the basics. Pierson, who was with Gehry’s firm until 2005, recalled some of the fundamentals he learned from working with the master. He said, “Pretty much every building in Gehry’s office is built from a model. You’re constantly building models. And those models are checked against a digital format. If you make a rendering, and a 3D computer model and a physical model, each model will tell you little bit different story about the building. You ultimately go back to the physical model for the ultimate verification.”

Gehry’s renown is worldwide, but he seems to be sticking close to home these days. Beside the 8150 Sunset project, Gehry is leading the design for The Children’s Institute headquarters, which (fer) studios will carry through its subsequent phases. He’s also overseeing a massive overhaul of the Los Angeles river. With almost 100 projects to his name, the majority have been located right here in the sunshine capital of the world. Gehry’s aesthetic may have evolved from the eclectic modernism the region is known for, but he’s undeniably defined the look of Southern California for over half a century.