in Pets & Wildlife, SoCal Trends, Sports & Adventures, Things To Do 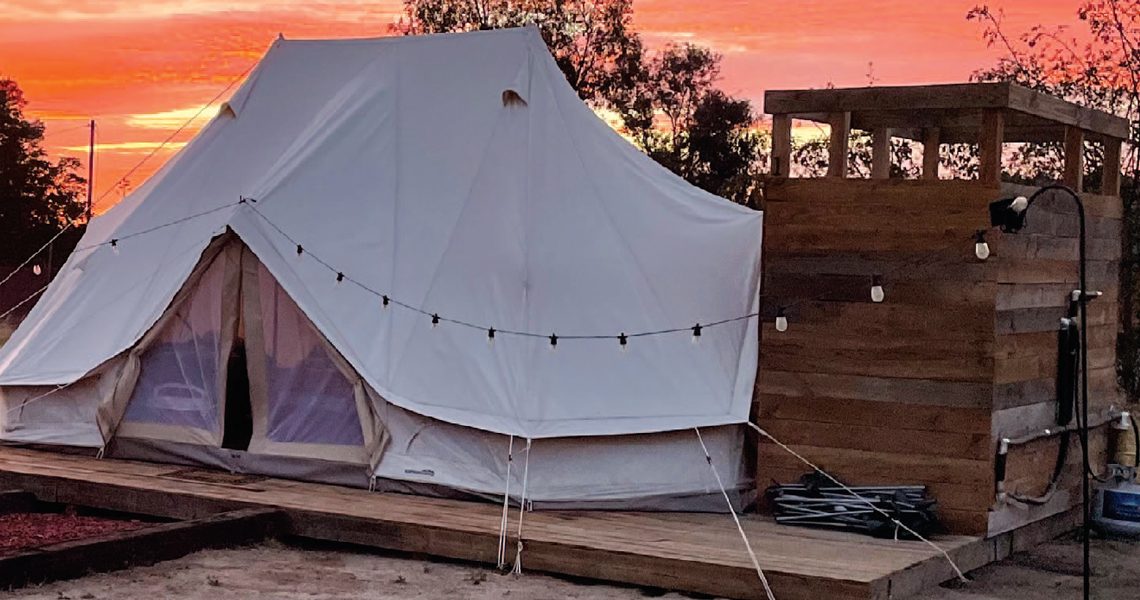 Gotta be honest: We’re not campers. Two small Jewish women from the city go camping sounds like the start of a joke or the end of a serial killing spree.

I know, I know, stereotypes. But in this instance, they’re true. We don’t own a tent, or camp stove, or camping, well, anything, unless sleeping bags and hiking boots count. That said, one of us is otherwise a fan of waking up surrounded by nature and the other is a fan of comfortable accommodations that don’t require set up or clean up and allow the dog.

In other words, glamping – glamorous + camping – was invented for semi-outdoorsy families like ours. Especially when it’s less than two hours from home, in southern California wine country, and surrounded by cute towns filled with shops we can meander during some seriously hot afternoons.

We – that’s me, my 18-year-old daughter and our 12-pound pup – found our way easily from Los Angeles to Eco-Camps’ glampsite in Warner Springs, maybe 30 minutes southeast of Temecula, entered the combination to the lock on the gate to the property, parked the car, and hauled our luggage (I won’t embarrass myself by using the word gear) toward our tent.

I also use the word tent lightly. This baby was about the same size as my first adult apartment (OK, trailer) and better ventilated, with a front porch, high ceilings, (faux) hardwood floors, and an adjacent bathroom that’s fully functional and affords a view of the bluest sky and brightest stars. The soft towels were a particularly nice touch.

We threw our stuff on the dresser and our respective beds, filled the (too small) cooler with the food we’d brought, figured out the hand pump on the eco-friendly toilet, and decided to embrace this indoor-outdoor adventure with a … nap, since we’d walked and eaten our way through the cowboy town called Old Temecula on the trip down and it felt like, no exaggeration, 180 million degrees outside.

A few hours later, as dusk approached, we decided to hike (OK, stroll) to higher ground to watch the sunset, which, without question, can only be described as spectacular: a tapestry threaded with reds, oranges, golds and blues. And as long as we focused our eyes outward and upward, the moment was magic.

Thing is, the property isn’t perfect, not yet at least. It opened in summer 2020 in the midst of the pandemic, just two studio-sized tents (expected to be as many as six this summer) on land that is too brown and too exposed. At the entrance, there’s a rundown building that the owners hope to turn into a restaurant and on the backside is what appears to be a makeshift junkyard replete with rusted-out cars.

The website says it’s situated on six acres, and also mentions wildflowers and grasses (plural). But there’s nowhere to walk, no woods or lake to explore, and no real shade. Nights are not filled with the sounds of wolves howling in the distance or birds chirping in nearby trees. Instead, there’s the whomp-whomp of trucks hitting rumble strips on the highway that runs alongside the property and the incessant barking of a dog we imagine is unhappily chained off in the distance. Did I mention that I could lay on my comfy queen-sized bed, complete with headboard, and glimpse the winery across the road through the front flap of the tent? (To be clear, this camper considers that a plus.)

All that said, we were having a blast despite, or was it because of, the (minor) obstacles. Maybe that’s because we’re so darn urban that this seemed like the middle of nowhere. But I prefer to think it’s because we’re adaptable, even if we did need an assist starting the gas grill, and were happy to get in the car and go seek solitude, food and fun. And our neighbors were the nicest – a mailman, nurse and their three young kids – who live relatively close to the campsite and were like having live-in tour guides. They’d point and we’d go.

Eco-Camps, which also has sites in Goleta near Santa Barbara and outside Boise in Idaho, is geared toward couples and families (loud partiers need not make reservations). So, let’s put this in order of importance: wineries (surprisingly easy and enjoyable even with a teen in tow); shopping (so much homemade soap, olive oil and apple pie – seriously, it’s a thing in these parts); lakes (can’t swim, it seems, but can rent everything from kayaks to motorized pontoon boats) and lavender farms (they weren’t open yet but are now).

In two nights and three days, we stopped in twice at the quaint Aguanga General Store five minutes up the road, made an emergency run to Temecula for female thingies, and stopped back in Old Temecula to build our own sandwiches at the locally sourced Eat. There were to-die-for spinach and feta cheese croissants at Dudley’s in Santa Ysabel, where we also did our fair share of sampling at Julian Pie Co.

It’s easy to overuse the word adorable, but the mountain town of Julian was that, too. An hour east of San Diego, and an easy drive from our tent, it has accessible hiking trails and the homiest-ever downtown, full of boutiques, apothecaries and candle/jewelry/soap stores. Also -apple pies in every window. So many apple pies we had to ask someone: What’s with all the apple pies? Turns out we were surrounded by orchards.

From there we decided (OK, mom decided) to hit some wineries, which, unfortunately, seemed mostly closed on a Tuesday. Fortunately, not Menghini Winery, where $10 bought me three pours and a seat in the gorgeously appointed garden.

Up the next day was Skinner Reservoir, a popular fishing spot with a small entry fee that’s give or take 30 minutes from camp. Think blue sky competing with an expanse of even bluer water. We walked the trail on the edge of the lake, ran the vast lawns with the dog, and hit the free water park – perfect fun for kids and a relief for overheated adults. As were the huge winery tasting rooms, one after the other after the other, that are on the road to and from Skinner.

Mostly, though, we made camp (or glamp). We roasted corn and potatoes on the grill, ate dinner in the moonlight, read in bed, and huddled together against the night cold (really cold – bring warm clothes; the spare blankets in the bureau were not enough).  For his part, the dog has never been happier. Really.

Everyone keeps asking if we’d do it again. (Never let it be said our friends don’t know us.) While we wouldn’t exactly call it swank, why, yes, we would (and we’re certainly up for testing out Eco-Camps coming properties in France and the UK). Pretty great to show up and have everything you need, from ice to toilet paper to lanterns, in a setting where you can go to bed clean and wake up to coffee without ever leaving the tent.