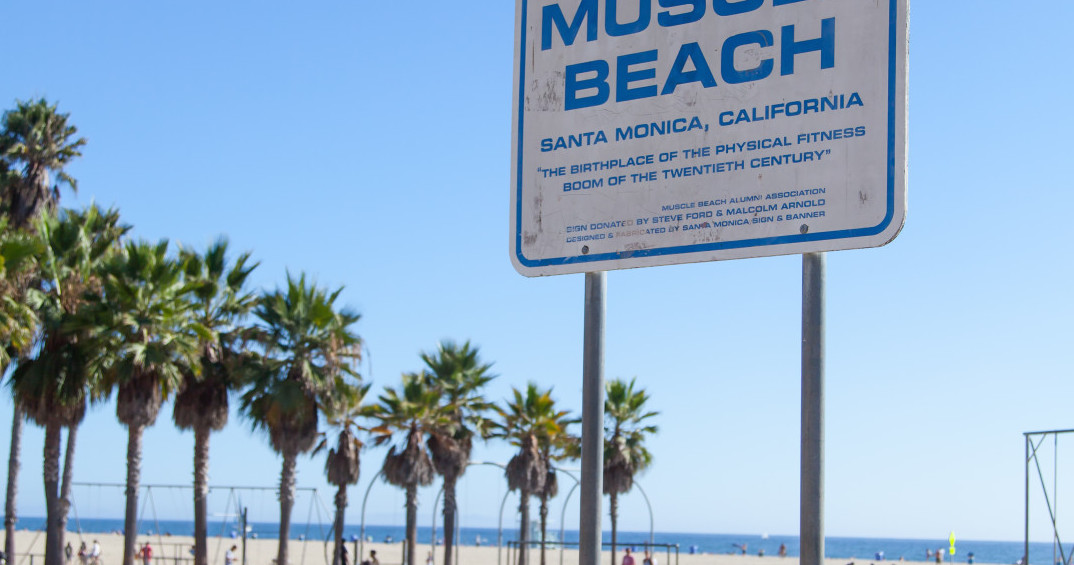 During the Great Depression, in an effort to improve the health and welfare of its citizens, the Works Progress Administration would install numbered playgrounds on many the beaches throughout Los Angeles. The program, which was part of Franklin Delano Roosevelt’s “New Deal” aimed to provide the “3 Rs”—relief, recovery and reform—for Angelenos faced with the many hardships of the time. New schools, parks, bridges and playgrounds went up in record numbers around the city, providing paid jobs for scads of unemployed men and women, and in turn, boosting the morale of people who’d lost all hope.

Beach Playground #4 was located right next to the Santa Monica Pier. In addition to swings and slides, it included a plethora of athletic equipment. Within a short time, Hollywood stunt men, circus performers and variety acts began congregating there to train and stay limber. The beach would really gain a reputation for good-looking athletes and perfect physiques, when the UCLA men’s gymnastics team began training there regularly. It’s been said that the section of beach just north of the Pier was such a popular spot for students to study, that it was nicknamed “Brain Beach.” The many strongmen posing and flexing in the sun were visible to studying co-eds who gave it the name “Muscle Beach” (as more of a joke than anything) never thinking the name would actually stick.

The city of Santa Monica made the name official in 1934. By the 1940s, Muscle Beach had attracted national fame. Hollywood had long been known for its glamorous movie stars; now it was making a name for itself as a hub for the most fit, beautiful bodies anywhere. And the men were like giants—like something right out of one of the movies travelers had seen on the silver screen back in the sleepy small towns they came from.

Marla Matzer Rose describes how unbelievable it was in her book on the workout hot-spot in her book, “Muscle Beach: Where the Best Bodies in the World Started a Fitness Revolution.” When she writes, “These guys were big: not just muscular, but massive by the standards of the day. Next to the slender gymnasts they appeared even bigger. They were like the sideshow strongmen of yesteryear; gods come down from Olympus to walk among the mortals….the very sight of their toned tan muscles was a show on its own. They were an important element in Muscle Beach’s rise in popularity and fame.” What’s more, Rose tells how “Everyone was a performer at Muscle Beach. Even in the early days of a simple mat on the sand, scores of people would crowd around for the chance to see the remarkable stunts. As the years went on, it became a huge event, with up to three or four thousand spectators jammed into the area.”

Former Muscle Beach competitive body builder, Steve Ford, says, “Muscle Beach brought that first wave of workout buffs associated with the beach; the celebrities like Jack La Lane, Vic Tanny, Steve Reeves of “Hercules” fame, Johnny Weismuller, who played “Tarzan” and Joe Gold, who started Gold’s Gym. People could travel from a small town out to Los Angeles, and walk right up and watch one of these guys working out for free! It was like no other place in the world. Southern California put fitness on the map and it started 80 years ago right on Muscle Beach.”

Muscle Beach Venice would get its start in the late 1950s, gaining national fame and recognition as well, especially during the 1980s and 90s. Today, Ford says, “Muscle Beach Santa Monica is still a destination for gymnasts and other athletic people, but it also has a larger diversion of athletics. There are still tons of gymnasts and bodybuilders that come; people also come to do yoga, pilates, Tai Chi and other martial arts. It’s become very diverse.”

Muscle Beach remains one of the most famous attractions anywhere; the name alone is known all over the world. To many, it is the birthplace of the health and body-conscious lifestyle that has been associated with Los Angeles for decades. And, Ford says, “It’s a place that was—and still is—one of a kind. In those early days, anybody visiting LA could step right up and join in what Muscle Beach offered; for a day, or for the rest of their lives.”