in People & Personalities, Things To Do 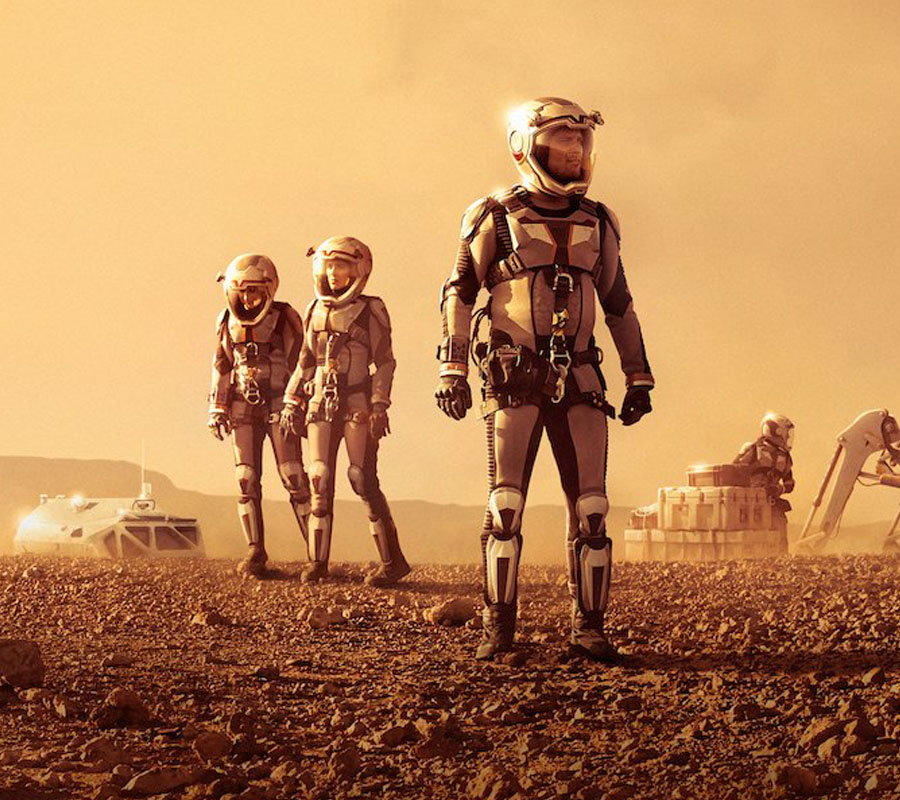 As MARS Season Two continues to unfold, this scripted and documentary footage hybrid, executive produced by Ron Howard and Brian Grazer, bares the day-to-day lives of the first pioneers to settle on the red planet. During a panel discussion with the show’s Big Thinkers, Stephen Petranek, Antonia Juhasz, and Casey Dreier, we talked about the new season’s themes and the current social commentary regarding our future as an interplanetary species.

According to Stephen Petranek author of How We’ll Live On Mars for which the series is based, we must become an interplanetary species to avoid extinction. The misconception of pursuing life on Mars is that we ought to fix Earth instead of seeking life elsewhere but realistically both actions must occur. “By terraforming Mars and making it more like Earth we will actually learn how to control things on Earth that seem uncontrollable at this point as far as the environment. There’s really going to be a big feedback loop from Mars back to Earth about how to fix things we don’t understand yet.”

Petranek insists that even with environmental issues aside, there are too many ways Earth will not work out for humans long-term (check out his Ted Talk on 10 Ways the World Could End) He explains, “You could wake up tomorrow morning and there will be a headline that says ‘7-mile wide asteroid cited near Jupiter.’ Most asteroid physicists think that’s a 100% probability. [It’s] just one thing that could go wrong with Earth.” He adds, “We will become an interplanetary species eventually…we have to. Earth won’t work for humanity forever.”

A core controversy underlying the new season of MARS is the question of exploitation vs. exploration and whether or not we will repeat the same mistakes on Mars as we have on Earth. Antonia Juhasz, American oil and energy analyst, reminds us that “it’s only in the last 150 years that we have created the ability to destroy our home.” She adds, “We still can do something here and we need to do something here. One of the lessons of this show is ultimately very hopeful. It goes through a lot of really gut-wrenching difficult discussions…How are we going to live on another planet? What sort of species do we want to be? What species are we?”

Of all the many reasons to go to Mars like avoiding human extinction, pushing the boundaries of human capability, understanding our own home planet—one of the single most worthwhile reasons is to inspire hope on a global scale.

Casey Dreier, Director of Space Policy at The Planetary Society and Expert on space and Mars exploration policy, states, “Even the challenge itself to organize a society to bring out the best in us, in engineers, scientists, and welders and every level of society would be engaged in this grand endeavor and we will be doing it for a peaceful purpose and an optimistic outcome that involves the world instead of competing and we can use Mars to organize ourselves for that very purpose in addition to having the offsite backup for humanity just in case.”

For anyone thinking negatively and assuming humans are too corrupt to build a sustainable community on another planet, Dreier urges that, “Cynicism is the biggest thing we should worry about. I think looking at shows like MARS and going to space is the antidote to that. Space is default optimistic. Even the idea of looking for something for pure discovery and trying to build a new world—all fundamentally optimistic.”

Now for some real head spins, going to Mars is just scratching the surface on future discoveries in space. Petranek closes out on this note, “It’s probable that by the time we actually get good at turning Mars into a place we would be very comfortable in we will find another Earth-like planet close enough to Earth to even live beyond the solar system. And that’s really our future.”