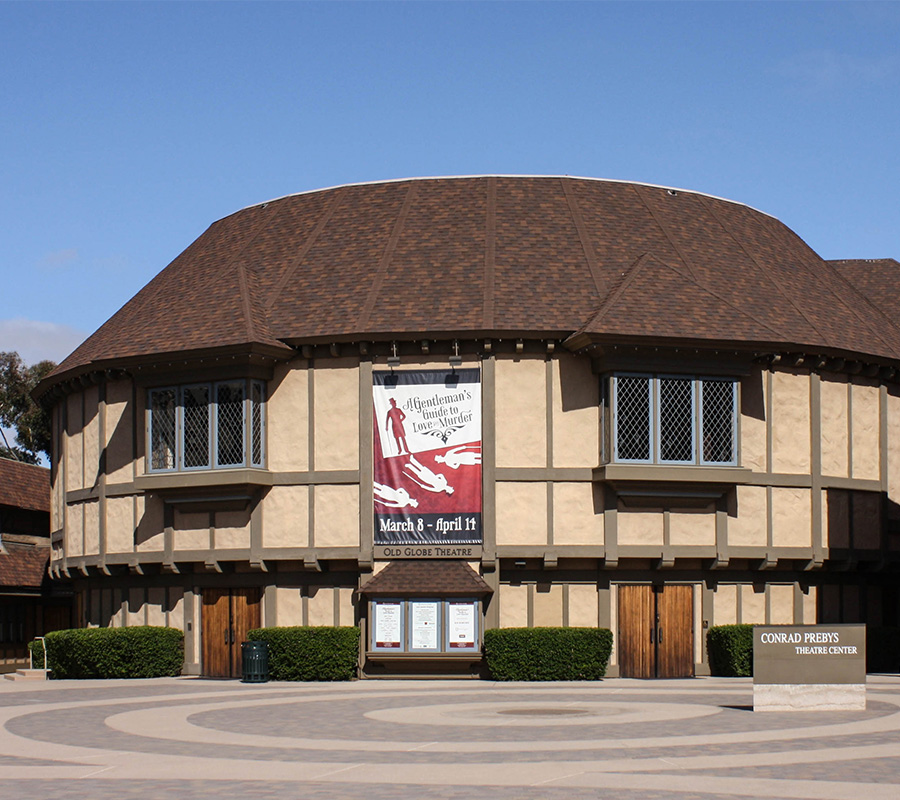 Over the years, San Diego theater has produced and sent more shows to Broadway than any other city in the nation. Yet, when most audiences think of top theater cities in the U.S., San Diego rarely makes the list.  Home of two Tony Award®-winning theaters, The Old Globe and La Jolla Playhouse, and diverse theater companies around the region, San Diego is ready to step out from behind the theater curtain and receive its well-deserved recognition and applause.

From major Broadway players to avant-garde indie playhouses, here are five San Diego theaters that are certain to bring audiences to their feet for outstanding performances.

Set on the campus of the University of California, San Diego in La Jolla, La Jolla Playhouse has created 26 productions that have transferred to Broadway, earning 35 Tony Awards® in total.  Since its first Broadway hit musical Big River in 1985, nationally recognizable productions include The Who’s Tommy, Thoroughly Modern Millie, Jersey Boys, Memphis, Peter and the Starcatchers and Hands on a Hardbody, just to name a few.  The original, rock-inspired new musical, Come From Away, which received its world premiere at La Jolla Playhouse during its 2015-2016 Season, is slated for its New York City opening in February 2017, adding to the long list of Broadway hits.

La Jolla Playhouse’s 2016-2017 Season included the world-premiere play, JUNK: The Golden Age of Debt written by Pulitzer Prize-winning author Ayad Akhtar.  This sexy and epic thriller took audiences back to the hotbed of the 1980s world of finances and offered an original story about an upstart genius hell-bent on changing all the rules.  La Jolla Playhouse also presents the new musical comedy Freaky Friday, based on the celebrated novel by Mary Rodgers and hit Disney films.  The show is a hilarious, contemporary update of an American classic in which a mother and daughter really see what it means to be a family and experience each other’s lives first-hand, if only for a day.

Modeled after Shakespeare’s Old Globe in London and originally built for the presentation of abridged versions of Shakespeare’s plays during the 1935 Panama-California Exposition in Balboa Park, The Old Globe is a cornerstone of San Diego’s rich theater landscape. Over its long history, more than 20 productions by The Old Globe have gone on to play Broadway and Off Broadway, garnering 13 Tony Awards® and numerous nominations.  Nationally recognizable productions include The Full Monty, Dirty Rotten Scoundrels, Dr. Seuss’ How The Grinch Stole Christmas!, A Gentleman’s Guide to Love and Murder and Bright Star, a musical production by comedian Steve Martin.

The Old Globe annually stages 15 productions of all periods and styles, ranging from classic Shakespeare during its annual Summer Shakespeare Festival performed on an open-air, outdoor stage, to exciting new works, along with the annual family musical Dr. Seuss’ How the Grinch Stole Christmas!  Its 2016-2017 Season included a new musical adaptation of the Jane Austen classic Sense and Sensibility as well as October Sky, a new American musical inspired by the popular 1999 film of the same name. This uplifting musical is set in 1957 in Coalwood, West Virginia after the launch of Sputnik and follows local high schooler Homer Hickam who dreams of a different life outside of the coal mines and looks high into the sky for a more exciting future.

Founded in 1976, the San Diego Repertory Theatre performs in downtown’s Lyceum Theatre, adjacent to the new Horton Plaza Park.  To date, The Rep has produced 43 world premieres and was recognized in 1998 with a Tony Award® nomination for its production of It Ain’t Nothin’ But the Blues; it has also received more than 200 awards for artistic excellence. The Rep chooses provocative works of theater to inspire audiences and create lively conversations about San Diego as a bi-national region.  The theater company has produced 37 main stage productions by Latino playwrights and hosted artistic residencies by Luis Valdez, Culture Clash, Yehuda Hyman, Marion J. Caffey, Octavio Solis and many more.

Its 2016-2017 Season includes a performance of The Sweetheart Deal, written and directed by Diane Rodriquez, a celebrated writer, director and performer in Latino theater. The play follows a couple who decide to leave their comfortable middle class life in San Jose, CA and volunteer for El Malcriado, the underground newspaper for the United Farmworkers Union. Another 2016-2017 production is Sex With Strangers, a sensuous and provocative comedy about fame, cyber identity and the desire for intimacy and respect between two strangers who are unexpectedly trapped in a secluded cabin during a winter storm.

Since opening in 2003, Cygnet Theatre has grown into one of San Diego’s leading theater companies and is known for producing adventurous, entertaining and thought-provoking theater year round.  During its celebrated history, Cygnet has staged more than 60 productions, with an eclectic mix of 6-7 productions seasonally, ranging from classics to Broadway-style musicals, and nearly half are local premieres.

The company performs in the intimate Old Town Theatre in Old Town San Diego State Historic Park.  Its 2016-2017 Season includes the classic musicals Gypsy and On The 20th Century and two plays by Pulitzer Prize-winning playwright August Wilson, Seven Guitars and King Hedley II.  Audiences are sure to be entertained with the season finale, Shockheaded Peter, lauded by Variety magazine as “A wryly seedy cabaret-punk musical.”

Performing on an intimate stage in the Rolando neighborhood near San Diego State University, MOXIE Theatre was founded in 2005 by an acclaimed group of female performers and directors whose mission is to create more diverse and honest images of women by using the art of theater.  Working with primarily female playwrights and giving special attention to plays that defy female stereotypes, MOXIE productions always share one similar quality – moxie.

Moxie Theatre’s 2016-2017 Season includes Peerless, a dark comedy about the very ambitious, inspired by Shakespeare’s Macbeth. The comedy follows the exploits of twin sisters M and L who give everything to get into “The College.” After a male classmate gets “their” admission spot, they devise only one option to remedy the situation: kill him.  Another brutally funny comedy in Moxie’s 2016-2017 Season, The Revolutionists, follows four real women who lived boldly during the French Revolution. The women hang out, murder Marat, lose their heads and try to beat back extremist insanity during the historic Reign of Terror.

Whether it is an outdoor production of Shakespeare at The Old Globe in beautiful Balboa Park, a brutally dark comedy at the MOXIE Theatre, a Broadway-bound, world-premiere new musical at La Jolla Playhouse, or a provocative new drama by an emerging Latino playwright at the San Diego Repertory Theatre, theater lovers can be entertained and dazzled year round by diverse, provocative and exciting performances by San Diego’s celebrated theater companies.

This is the time of year Southern Californians beg

Congrats to all the couples surviving quarantine t

Practicing swinging our clubs indoors is not as fu

I donut know why people hate Monday?! Keep on spar