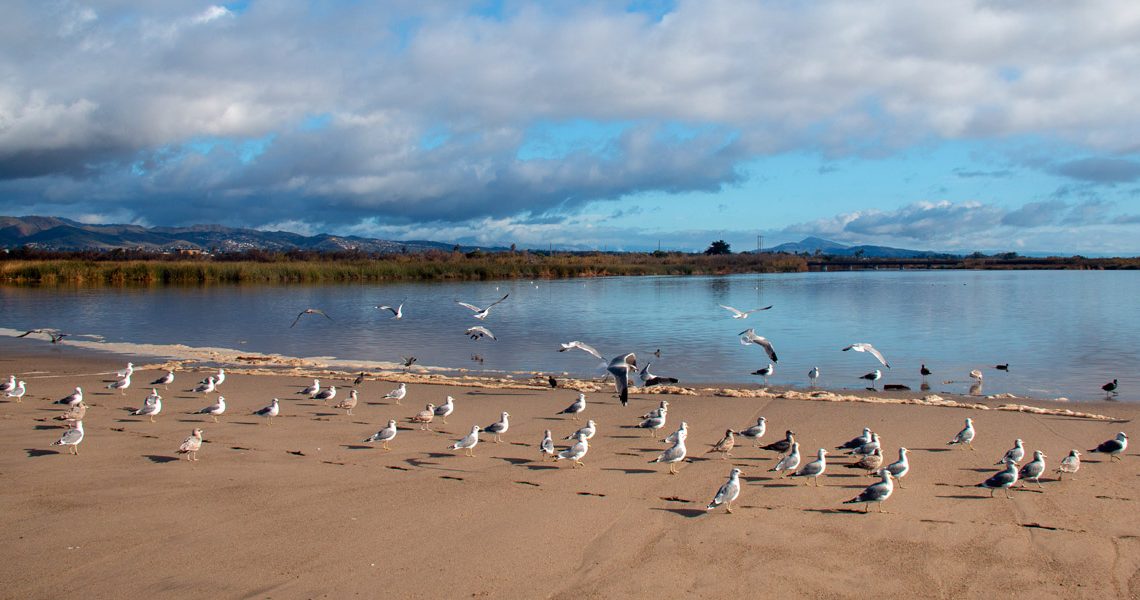 At the Ventura Harbor Village, flocks of tourists pick through shops selling clunking bamboo chimes and fish-shaped ice cream cones. On the opposite side of Spinnaker Drive, surfers bob on the ocean’s surface waiting for the perfect set. However, a third unseen group gathers along Spinnaker – floating, eating and soaking up this seaside retreat. Just 400 yards from popular beach Surfer’s Knoll sits the Santa Clara River Estuary, a nature preserve where almost 280 species of birds have been observed.

The Santa Clara River Estuary is tucked along the Ventura coastline — less than three miles from Highway 101. Unknown to most spreading out their beach blankets, sits one of the richest bird watching environments in Southern California. And perhaps that is a good thing. An easy five-minute walk away is the protected habitat of the Western Snowy Plover, a small shorebird who nests in the sand above the high tide line.

Once parked, follow the beach to the left at the shoreline (so as not to accidentally roam through a plover nest), past the signs and the dunes scraggly with invasive ice plants. The coastal playground evolves into habitat as bits of dried reeds and lost feathers litter the path. In some seasons, the sand rises from the water inland into a 2-3’ wall that must be climbed. In others, it is a flat plateau stretching from ocean to estuary pond where the brackish water empties across the way, returning to the sea.

The estuary is a confluence of river ways, ocean and species. In the pond, upwards of 30 Mallards, Ruddy Ducks, and Grebes chase their young in a game of “Not It”. However, the real show is farther down: more than 100 birds, and at least 10 different species, peacefully swim, eat, and sunbathe together… like crashing a private beach party. Since the approach is down wind, the birds remain undisturbed, the air hushed, filled with nothing but the sounds of wind and large wings. Brown pelicans rise a foot above the surface of the tidal pool only to repeatedly dive back down, plunging for their meal. Cormorants pop in and out of the water alongside disapproving American White pelicans. Legions of terns and gulls stand shoulder to shoulder watching the sea.

Arrive around sunset and witness ‘last call’ of this party. One by one, waves of pelicans, gulls and others rise up and depart for their evening roosts, having finished another glorious day at the shore.

From Hwy 101, exit at Seaward Ave. Turn left onto Harbor Blvd. Continue south to Spinnaker Drive. Turn right onto Spinnaker, drive past the parking lot to Surfer’s Knoll on the left, take a U-Turn once you’ve passed to access the entrance to the lot. From the parking lot, walk down to estuary (approx. 400 yards). Open year-round. During May-August avoid fenced-off Least Tern colonies. No dogs allowed.