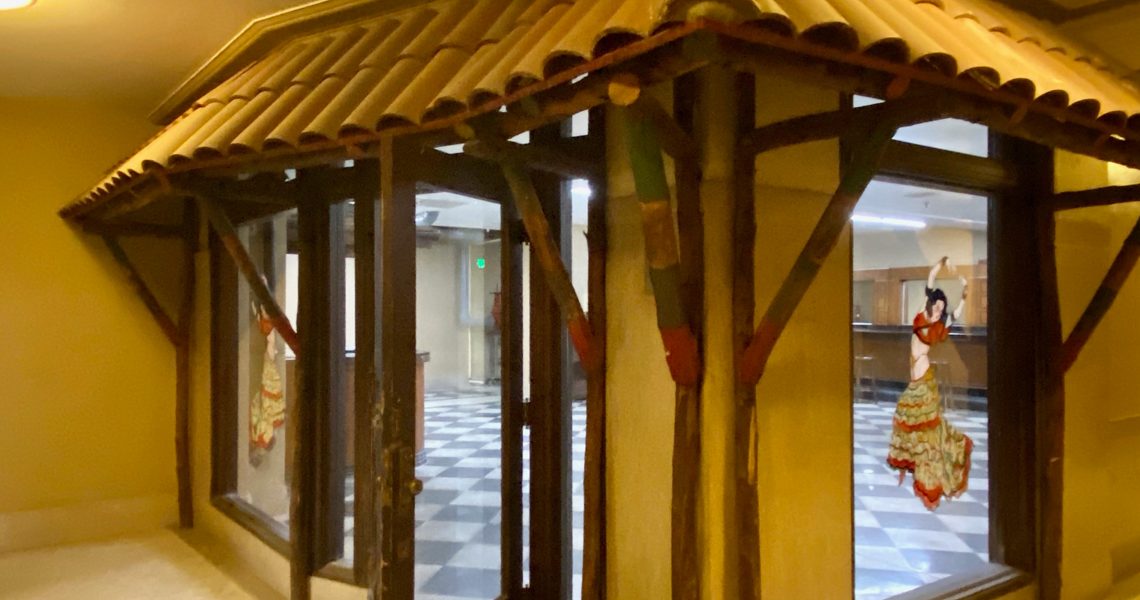 Carefully climbing down into the bowels of a famous watering hole that still exists today on the outskirts of Skid Row, I wonder if I should turn back. The smell of rodents or maybe dead air from 100 years ago wafts into my nostrils, suffocating my senses. I try not to breathe too hard. Are those rat droppings? A cockroach skitters. Ducking below an old cobweb, I wonder what life was like down here in the 1920s. Images quickly come to mind from the HBO show Boardwalk Empire of gangster life in Atlantic City.

But here we are in the recesses of Wild West Los Angeles. Once a fake piano shop above the bar, a mural of kegs painted on the wall are still present under the city streets next to a false wall made of light wood and sideboards for food and drink. Evidence of what was once a Prohibition-era tunnel is slathered and sealed off with concrete – apparently just cemented in the last 20 years. A crumpling dusty room nearby in the cellar exposes old metal bank vaults where booze money was kept – exchanged and transported underground from banks. Once upon a time, even tunnels lead from hotels to presidential suites.

Pre-pandemic, in February of 2020, my curiosity steered me to sign up for this historical journalist-led walking tour with Cartwheel Art Tours. In Downtown LA’s underbelly, it is soon clear Los Angeles was once one of the most corrupt cities in the country, with more than 300 speakeasies buzzing during Prohibition (1920-1933). While we rummage around under the city streets due to special permission from private owners granting access, the longstanding bar owner also joins us in the cellar, exposing the past with his own findings – showing a smashed open safe that once held around $14,000 in cash and divulging the discovery of a bootlegger map on the wall offering up the secrets of the illegal liquor trade. A few steps further in this seedy pit, wall pencil sketches of flappers performing sex acts don the walls of the dank basement. I wonder if they are truly original.

Back above ground, a vintage hotel built in the 1920s comes alive with stories of demise. A place I would have walked by without a thought now has a personality with tales of nefarious people coming and going, all visitors able to get away with their sinful behavior. Suicides galore. Murder. Was it the sign of the times or did staying here shroud guests in a dark light?

“The Suicide Woman” flew out the 9th floor after a fight with her husband. After he returned from dinner, her limp body was found on the street atop an older deceased gentleman who had been crushed. Was she pushed or did she jump to her death? The lurid ghostly tales continue on through the ages in front of this “haunted” building, ending with the death of a 27-year-old Canadian student found inside one of the water supply tanks on the roof. Just last year we were instructed not to share the name of this boarding house, but Netflix unveiled its seedy past to the world in a docuseries called Crime Scene: The Vanishing at the Cecil Hotel. Even LA’s creepy Nightstalker spent time at Hotel Cecil where no one seemed to notice him coming back splattered in blood.

Plunging below civilization again in what was once the heart of Los Angeles during the silent film era, my mind conjures up secret drinking and illegal deals in this 11-mile connected tunnel system built in 1910.  Deep under a former hotel, a tiki exterior with flamenco dancers painted on glass greets us before leading into a wooden bar with a piano – all discovered in the year 2000. Across the way, surprisingly, a barbershop is down here, too, while spiders lurk everywhere. My curiosity takes me to a closed off service tunnel – now sealed with a tiny sign reading “STAIRWAY” with an arrow. The tour guide takes a photo of us in the tunnel, claiming that once a guest caught a ghost in her cellphone photo.

Back into reality and a bit farther down the road, “DANGER” spelled out in the concrete below my feet in shiny metal is a remnant of a trolley warning to pedestrians. In the 1920s, Los Angeles had the best public transportation due to the trolley system. This helped fuel the city’s growth at a time when buildings scraped the sky at 12-14 stories.

Just walking through downtown Los Angeles is like stepping back in time, but without knowing a little bit of the history – you may miss key spots because many of these speakeasies, dilapidated hotels, and watering holes are not advertised, thus the beauty of Cartwheel Art’s tours exists in bringing life to this bygone era. Due to the pandemic, Cartwheel Arts (based in the Downtown LA Arts District) offers exciting enriching cultural tours, lectures, and programming online now – many for free by educational historians. However, small group custom tours are still possible. Topics include not only Underground LA, but also Golden Age of Cocktails, LA Vice, Arts Districts Murals, Paranormal Nights, and Graffiti and Machines.