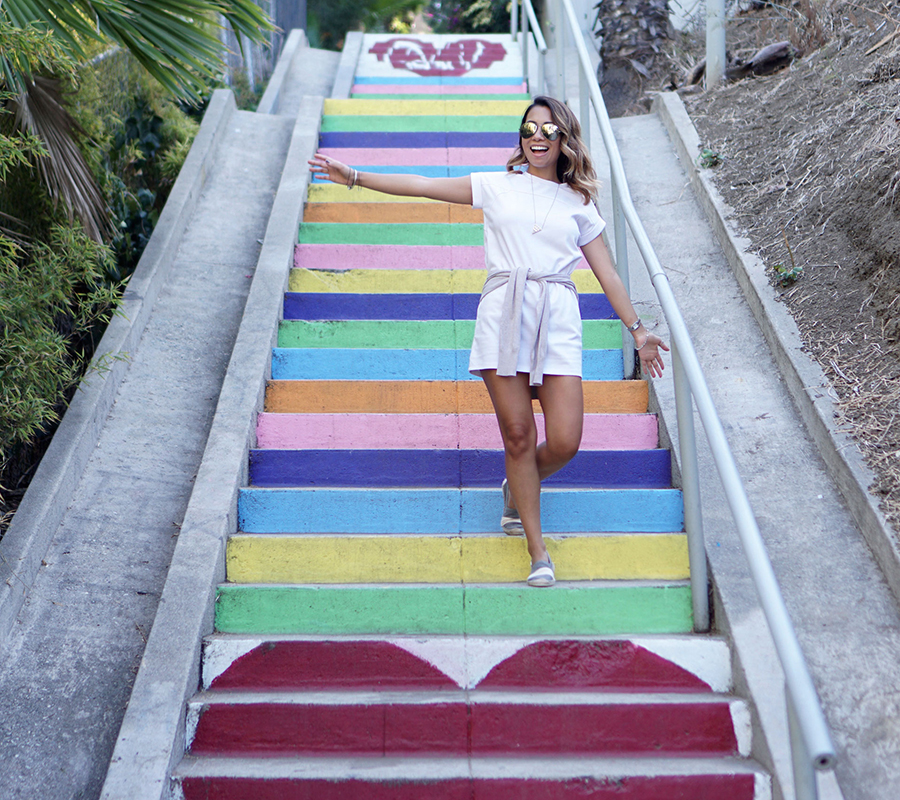 Southern California’s unique topographic contours have allowed for not only several “secret” outdoor stairways, but ones that wrap around, descend along hike paths, and surprise in sinuous fashion. Up until now, there have been eight stairwells in particular that were usually encountered by only land explorers, though are now revealed for all to revel in.

Located in La Mesa, CA on Windsor Drive (between Canterbury Dr. and Normal Ave.), this stairwell will test your endurance and leg/calf strength. It provides such a lower-body workout that personal trainers are known to bring their clients here. If you feel up to the challenge, not only will you shed a multitude of calories, but you’ll also appreciate the exclusive ambiance of the neighborhood that contains the steps.

Comprised of around 420 steps and a distance of 2.5 miles, this staircase can be found on High Tower Drive (off Camrose Drive). It is very much in harmony with much of the cacti and fences of homes that embroider the path. For the sake of viewing Hollywood and the bright lights in the vicinity, these steps may offer the best views. If nothing else, you should be able to glimpse the Hollywood Bowl when you’re walking along the Alta Loma Terrace.

Located in Mt. Washington, a neighborhood in Los Angeles, these stairs, which amount to roughly 150 steps, are a little more difficult a task than one might expect. Beginning at the corner of Figueroa and Avenue 45, the walk path culminates at the Self Realization Center. This is especially rewarding as it is made up of many gorgeous gardens to relax in. For the sake of tranquility, this is the best option on this list.

Ocean lovers, this one is for you. These stairs, adding up to over 500 in total, roll past the Getty Villa and Topanga Park. Of course, there will also be myriad ocean views and palatial beach homes to marvel at. Be prepared to bring lots of water, however, as it stretches over three miles. And when you do start your step-by-step odyssey, be sure to begin at the lower stairs right near Gladstones Restaurant.

Located on the Murphy Ranch Trail on Capri Dr. and Casale Rd. in Brentwood, this procession of stairs is known for its spookiness because of the macabre graffiti and abandoned homes. Not to mention, there is a derelict compound as well, which bore the brewing of much evildoing during the World War II era. For the experience alone, you won’t regret a single one of the 1,000 steps to be taken.

These 205 or so steps, hidden away in Silverlake between Silverlake Boulevard and Winslow Drive, are colorfully artistic. As part of the “Adopt A Stairway” program in the region, residents are invited to make many of the steps their own, so to speak. This involves painting the steps in vibrant hues with geometric patterns that have to be seen to be believed.

Secretly tucked along Dover Rd. in Santa Barbara, this stairway offers a very rustic and lush representation of the area. If you take the steps that lead up to Mission Ridge Road, you’ll find yourself in awe of the incredible vistas overlooking the city and, of course, the famous 15-acre Franceschi Park.

Beginning just east of the Shakespeare Bridge, the series of steps (around 700) at this suburban spot should take around two hours to finish. There is some historical significance too, as much of it dates back to 1923. The best part of the walk, though, might be the extravagant view of the Griffith Observatory.