Surf and Rescue: George Freeth and the Waterwoman Tradition in California Beach Culture 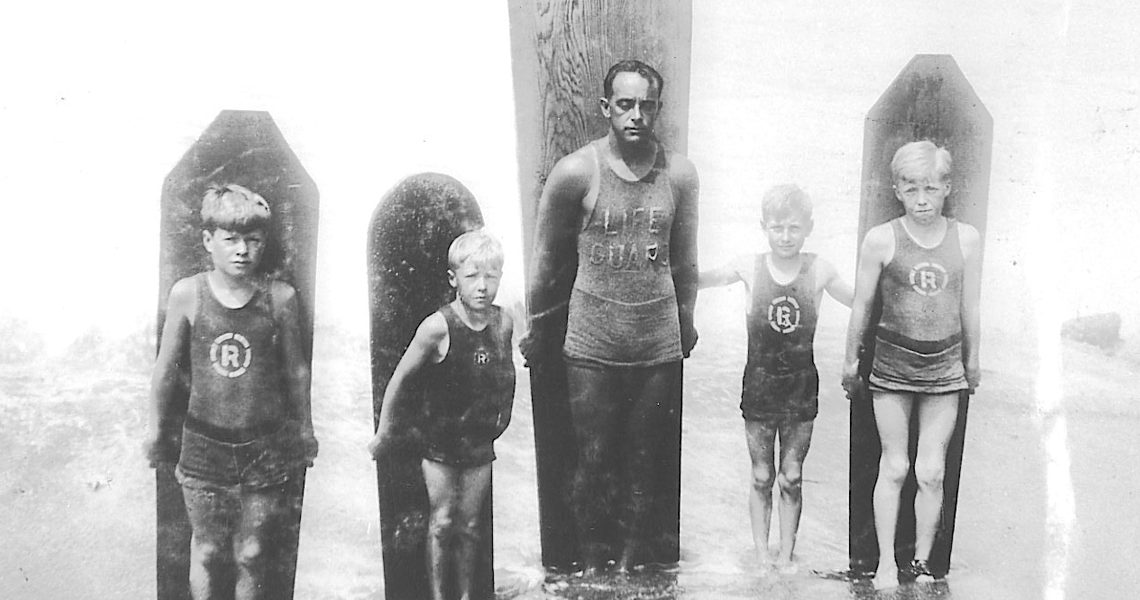 George Freeth (1883-1919) created the foundation of California beach culture by pioneering its two major activities: surfing and lifeguarding. His Native Hawaiian heritage and upbringing made him more progressive than most in the Progressive Era.

At a time when women were not encouraged to compete seriously in sporting events, George Freeth taught them how to swim, row, dive, and surf. He entered them in state and regional tournaments even though their accomplishments were not officially recognized because the Amateur Athletic Union didn’t sanction women’s events until 1914. Freeth’s sense of beach culture always included women. He trained them hard and promoted their achievements. Although Freeth taught writer Jack London how to surf at Waikīkī in the summer of 1907, his work with women in many ways represents a counter-narrative to London’s hypermasculine stories of mastery and dominance in the surf. With some exceptions, Freeth’s egalitarian sense of wave riding — traditionally practiced by both sexes in Hawai‘I — was not the path that California surfers chose to follow in the decades after Freeth’s death. But it could have been.

Freeth started coaching women soon after arriving in Venice in 1907. On Labor Day, 1908, two young swimmers known as the “Seaweed Sisters” — Dorothy Newkirk and Avis Gordon — competed with Freeth in a three-and-a-half-mile swim between the Santa Monica Pier and the Venice breakwater. Newkirk and Gordon had become notable not only for their swimming exploits but because they wore men’s bathing suits, which helped lower their racing times. Freeth won the competition that day in one hour and 13 minutes. Despite a heavy swell and cross currents, both women finished strongly: Newkirk in an hour and thirty-seven minutes, and Gordon in an hour and forty-one minutes (both were given a ten-minute handicap). The event highlights Freeth’s great effectiveness as a coach. He typically competed alongside his students, encouraging them to challenge both him and them. He followed the same strategy with all his protégés, whether it was Olympic gold-medalist Duke Kahanamoku or local high-school sensation Dorothy Newkirk. It would not be surprising at all if Freeth had encouraged the women to don male suits, both to improve their times and to increase their safety since women’s suits of this era were more akin to dresses in their length and weight.

Abbie Victoria “Dolly” Mings was Freeth’s first female star in Redondo Beach. At 17 she came in third place in the mile at the Pacific Coast Swimming Championships in September 1911. Once Freeth arrived back from Hawai‘i in November 1911 and started working with her, she quickly vaulted to prominence in the shorter distances. She won the 50-yard freestyle at a tournament that included the men’s Olympic tryouts in March 1912. Had American women been able to compete in the Olympics (this didn’t happen until 1920), she certainly could have earned a spot. In August 1912 Freeth inaugurated the open-ocean swimming championship in nearby Ocean Park. Mings won her race wearing a men’s bathing suit. She completed her season in September by winning the 100-yard freestyle in the Southern California Swimming Championships.

Although Dolly Mings married in January 1913, she continued to train with Freeth. Her routine began with a two-mile run every morning up the beach. Freeth’s method of cross-training for his young swimmers – running, diving, and surfing – built their strength and endurance, which gave them an edge in competition. Dolly Mings defended her title in July 1913 as the fastest woman swimmer on the Pacific Coast by setting a record in the 50-yard freestyle. Because women’s events were not yet officially sanctioned by the AAU — New York President James Edward Sullivan thought women had “little or no place in athletics” — Mings swam her events before and after the men’s competition.

Freeth continued to coach women to swim and surf from Los Angeles to San Diego. Although he passed away in the prime of his life during the influenza pandemic of 1918-1919 (he was thirty-five years old), his legacy of creating a waterwoman tradition as part of California beach culture lived on through his students. Lyba and Nita Sheffield, who had trained under Freeth in Venice, later organized the Girls’ Life-Saving Corps when they became students at the University of California at Berkeley. They wrote a textbook in 1920 — Swimming Simplified —that included several chapters on rescue techniques and included a picture of Freeth on a three-wheeled motorcycle that he had developed for lifeguarding.