The Fantastic-Four “Castles” in Southern California 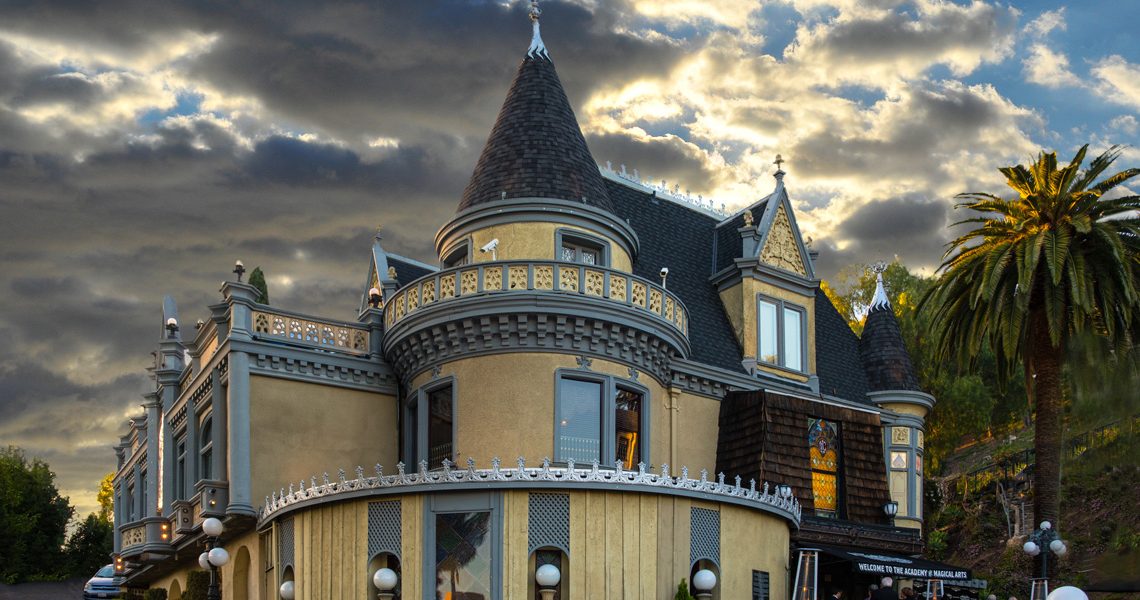 When you hear the word “castle,” you might immediately think of stone-spiraling relics of antiquity that serve as reminders of a bygone era of humanity when vassals, lords, and fiefs ruled the land. But “castle” can also be used to describe postmodern architectural phenomena that are as relevant today as they were when they were first erected. There are four prime examples of “castles,” re-imagined with class, dignity, and prestige for the contemporary Southern California resident.

The Desert Castle in Palm Desert

The Desert Castle in Palm Desert is one of the foremost vacation retreats in the area. The 7-bedroom, 7.5-bath mansion is what opulent and lavish dreams are made of.  The castle is situated rather unexpectedly on the 18th fairway of the Desert Springs Golf Course. The main house is beige in color and wonderfully rustic in design, with plenty of palm trees and welcoming archways for visitors. At night, the castle lights up with an attractive orange incandescence that infuses the observer with inspiration.

Inside the Great Hall of the property is a particularly classic overhead mural on the vaulted ceiling featuring women (of possibly the Baroque era) playing instruments and dancing, in addition to a loving couple holding their babies. The living room, moreover, is spacious with an open view of the verdant patio.

There is of course the dining room with gold-plated chairs, bedrooms/beds with ornate-column wood designs and bathtubs carved out of marble. Not to mention, there is a pool/spa replete with a waterfall.

The Magic Castle in Hollywood

Opened on January 2, 1963, the Magic Castle is one of those exclusive places, with a strictly-adhered-to dress code, that you hear about, but unfortunately can’t attend and witness first-hand if not for being a member (there are only around 5,000 in all) or receiving an invite from one who is. If you are one of the lucky ones, you’ll enter the heart of the roughly 20,000 square-foot establishment once you tell an owl statue next to a bookcase in the lobby to “Open Sesame.” From there, you’ll be among five wood-shined bars, including one from the 1969 film “Hello, Dolly!”, and  find yourself nestled inside an ambiance with furniture primarily imported from abroad.

Furthermore, you’ll be among the vintage Harry Houdini seance room (which costs $1,000 per person to have dinner in) his well-kept artifacts, including his old handcuffs, milk jug, and one of his straitjackets. The origins of Disneyland’s Haunted Mansion is also explained at the castle with the actual prototype, crafted by Magician Master Gracey, for the famous scene where Victorian-era ghosts are circling a candlelit dinner.

Of course, there is the magical sleight of hand by a lineup of legendary connoisseurs of magic, which changes on a weekly basis. Four rooms in total and two bars (The Close-Up Gallery, Parlour of Prestidigitation, and The Palace of Mystery, The Peller Theatre, Hat and Hare Pub, and W.C. Fields Bar) house the acts. One tenured magician at the castle who must be seen is the fantastically charismatic, playing card-illusionist, Bodine Balasco. Certainly, the dinner offered at the restaurant on the premises is fabulous, highlighted by the calamari and garlic/rosemary-marinated and the incredibly tender Colorado Rack of Lamb.

Standing since 1921, after 12 years of conception, design (taken from Middle-Eastern and Asian influences), and construction that were commissioned by owner and San Diego fashion designer, Amy Strong, this castle features 27 rooms and an intercom system. It is also known for a gorgeous windmill (historically used for pumping water from the underground springs) and a blessed roof, the tiles of which were borrowed from the San Gabriel Mission.

Today, the castle and its surrounding property are primarily used for weddings, receptions, and parties. The original essence of the castle has been left mostly untouched, as well, given the fact that the only difference in the last 95 years since the castle was completed are modern amenities.

Many dream of the perfect wedding on a peaceful, private hideaway far away from the hustle and bustle of everyday life, but very few find the ideal location. The Enchanted Forest Castle is that and more with cobblestone walkways and a stone-brick design right out of the King Arthur epoch; in fact, the only thing missing is a moat. But it does have a helipad for those who want to arrive or depart in style with a helicopter or small plane.

Having been the vision of a husband and wife team since 1998, it satisfies goals of grandeur for aspiring spouses between the months of May and November. That being said, weddings aren’t the only rite of passage that transpire at the castle, either, as it has been also known to host birthday parties, anniversaries, and school proms.