in Destinations & Landmarks, Things To Do, Uncategorized 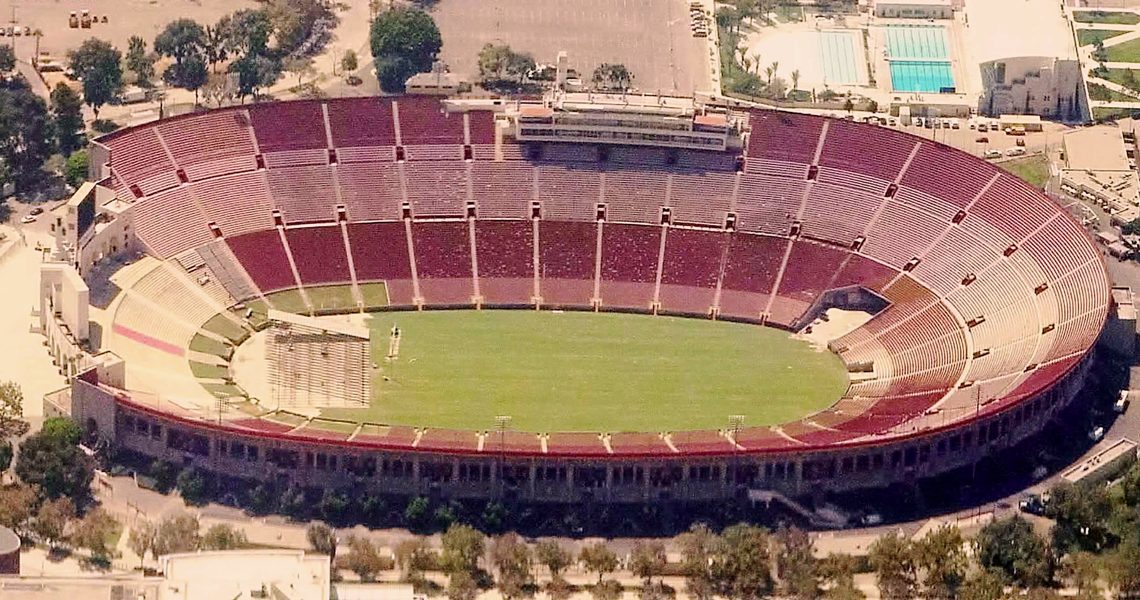 As the only venue to host two Summer Olympics (and soon a third in 2028), two Super Bowls, home to numerous professional teams, appearances by six U.S. Presidents — Franklin D Roosevelt, Dwight Eisenhower, John F. Kennedy, Lyndon Johnson, Richard Nixon, and Ronald Reagan — and such dignitaries as Martin Luther King, Pope John Paul II, the Dalai Lama and Nelson Mandela and such performers as Bruce Springsteen and the Rolling Stones, the Los Angeles Coliseum has deservedly earned its title – The Greatest Stadium in the World.

One hundred fourteen billion people have come through the stadium in 96 years.

Originally commissioned in 1921 as a memorial to Los Angeles veterans of World War I (and rededicated to all U.S. veterans of WWI in 1968, it is the largest memorial outside of the one in Washington, D.C.

The official ground breaking of the Coliseum took place in December, 1921. The construction of the then largest stadium in Los Angeles was completed on May 1,1923. Its capacity was 75,144, but in 1930, with the Olympics due in two years, the stadium seating capacity was expanded to 101,574 and the Olympic torch was added.

“It is a legacy unlike anyone else,” says Joe Furin, Coliseum general manager. “We find that we get a lot of international visitors who saw the Olympics and a lot of U.S. visitors who remember all of this or have seen some of these things. The 1959 World Series, for example, still holds the attendance record of over 104,000 people for a World Series game. When you have people who have seen these things, the legacy is a big draw.”

On March 29, 2008, the Los Angeles Dodgers and the Boston Red Sox set a Guinness World Record for the largest attendance ever at a baseball game with a crowd of 115,300.

Some televised events to which Furin refers to that may be cemented in minds include the 1967 Super Bowl game between Green Bay Packers and the Kansas City Chiefs and the 1973 ABC Wide World of Sports captured the event as Evel Knievel used the entire distance of the stadium to jump 50 stacked cars. Knievel launched his motorcycle from atop one end of the Coliseum, jumping the cars in the center of the field, and stopping high atop the other end.

Television shows have filmed at the iconic venue, including the memorable season two finale cliffhanger of the hit show “24.”

“If you’re a sports fan, I take nothing away from the Red Sox and Fenway Park or the Greenbay Packers and Lambeau Field. They will say theirs is the greatest in the world. I mean no disrespect, but the legacy we have sets us apart worldwide. There is no other stadium in the world that has hosted two Olympics and we’re going to host a third,” says Furin.

Tours are currently unavailable until January 2020 due to renovations, although the 160 acres of Exposition Park around the stadium are open to the public.

“There are no fences and you can walk up to the exterior and still get a magnificent experience,” Furin asserts. “Sometimes I work at all hours and am leaving at 10 p.m. and I see a car pull up outside the gates and I’ll see people hop out and take a picture and drive off.”

Renovations, which began in January 2018, carrying a price tag of $315 million will include replacing every seat and improving the wifi service. They are adding suites, a club level, a loge and press box. They will complete the project August of this year, in time for the 2019 football season.

“This is a very special place,” Furin says. “At first you see a 96-year-old stadium, but then the longer you look, you realize that legacy.”