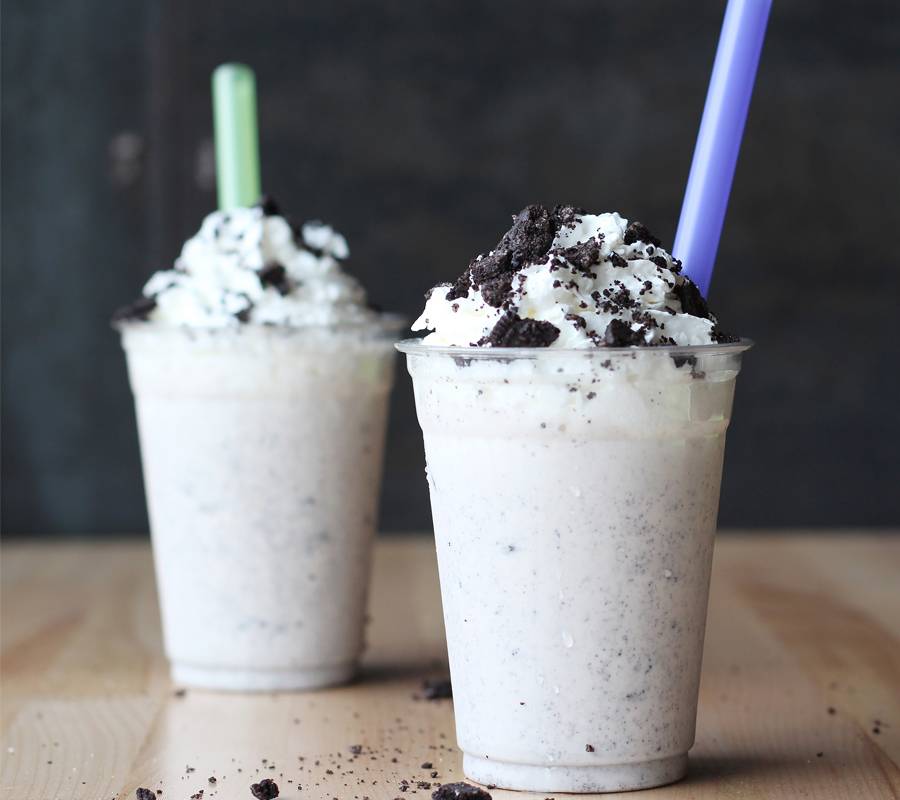 California isn’t known for its dairy industry, but as the unofficial foodie mecca of the United States, we know how to spruce up classics with delicious twists. Milkshakes are an American staple, but some of these recipes are purely SoCal. Here’s a roundup of the best milkshakes in the region worth coming to the yard for.

Hailed the restaurant that never sleeps, Brian’s 24 is open 24/7 in the heart of San Diego’s bustling Gaslamp District. This is a “classic” diner, so it’s only appropriate that they serve classic shakes and malts. These gargantuan 32 oz concoctions come in three delicious flavors: vanilla, strawberry and chocolate, with a heaping serving of whipped cream. If that’s not enough to whet your appetite for 1950s nostalgia, they all come with two straws for sharing. Drink up, and maybe you’ll have enough energy for a good ole’ sock-hop!

Good burgers are nothing if they aren’t served with good milkshakes, but Burger City Grill is all about great burgers. Their classic milkshakes are equally delicious, coming in chocolate, vanilla and, of course, strawberry, all topped with fresh whipped cream. Don’t be fooled by the price – the ice cream in these milkshakes is award-winning! Burger City Grill has two locations in Downey and Lomita, with several more in Torrance coming soon.

HopDoddy Burger Bar is a growing restaurant chain with locations in Texas, Colorado, Arizona, and now Los Angeles and Orange County. It’s been named one of the best burger joints in the nation, but expect to see its milkshakes reach infamy as well. Going above and beyond what’s needed for malt beverages, the milkshake menu boasts of Vanilla Bean and Stout Chocolate shakes, as well as exotic delights like Red Velvet Cake and a Nutella and Chocolate Pretzel Shake. The wine menu isn’t bad either, so hopefully it wouldn’t be too much of a stretch to ask them to put together a milkshake flight.

Salt & Straw is relatively new Southern California import from Portland, but it’s already developed a cult following throughout Los Angeles. You can turn any of the scoop shop’s tongue-teasing flavors into a milkshake, but absolutely check out the Whole Pint Vanilla Milkshake with Barrel-Aged Maple Syrup – it’s an artisanal treat. You can also have any milkshake enhanced with Pomegranate Pok Pok Drinking Vinegar for an extra exotic kick, brimming with tart berries and notes of rose petals. If you haven’t already noticed, you’re probably going to have to wait in line at any of Salt & Straw’s four Los Angeles area locations, but we guarantee you it’s worth it.

Twin Sliders in Hollywood has all the classic diner staples, from Angus beef sliders to chocolate, vanilla and strawberry shakes and malts. But this is actually a very worthy destination for milkshake connoisseurs, because Twin Sliders offers The Big One: a dairy delight of Oreos, M&M’s, Reese’s Peanut Butter Cups, Cinnamon Toast Crunch, Butterfingers and a whole Twinkie. The whole affair is going to set you back a whopping $18.99, but let’s be honest, that’s a meal.

Milkshakes aren’t the first thing that come to mind when you think of nature’s candy, but Shield’s Date Garden in the Inland Empire is making a good case for changing that. They’ve dubbed their milkshake the world’s finest date shake, featuring a heaping serving of their proprietary Shield Date Crystals. If you find a way to improve perfection, they have an open submission policy for customers’ recipes as well.

Founded in Santa Barbara in 1949, McConnell’s Fine Ice Creams is still one of the reigning dairy queens of Southern California. At their original scoop shop in downtown Santa Barbara, they offer their delicious Cooooookies Shake, a mix of sea salt cream & cookies ice cream along with cookies & cream ice cream and a heap of chocolate chunk cookie pieces for good measure. For an even more exotic dairy dream, check out the one-of-a-kind Pumpkin Pie Shake. After one sip, you may never order a Starbucks Pumpkin Spice Latte with quite the same reverie ever again.

in Featured, Things To Do
8 Steps to Get Your Mojo Back This Summer
in Pets & Wildlife, Things To Do, Uncategorized
The Best Hikes in Los Angeles
in Things To Do
Driving Down PCH